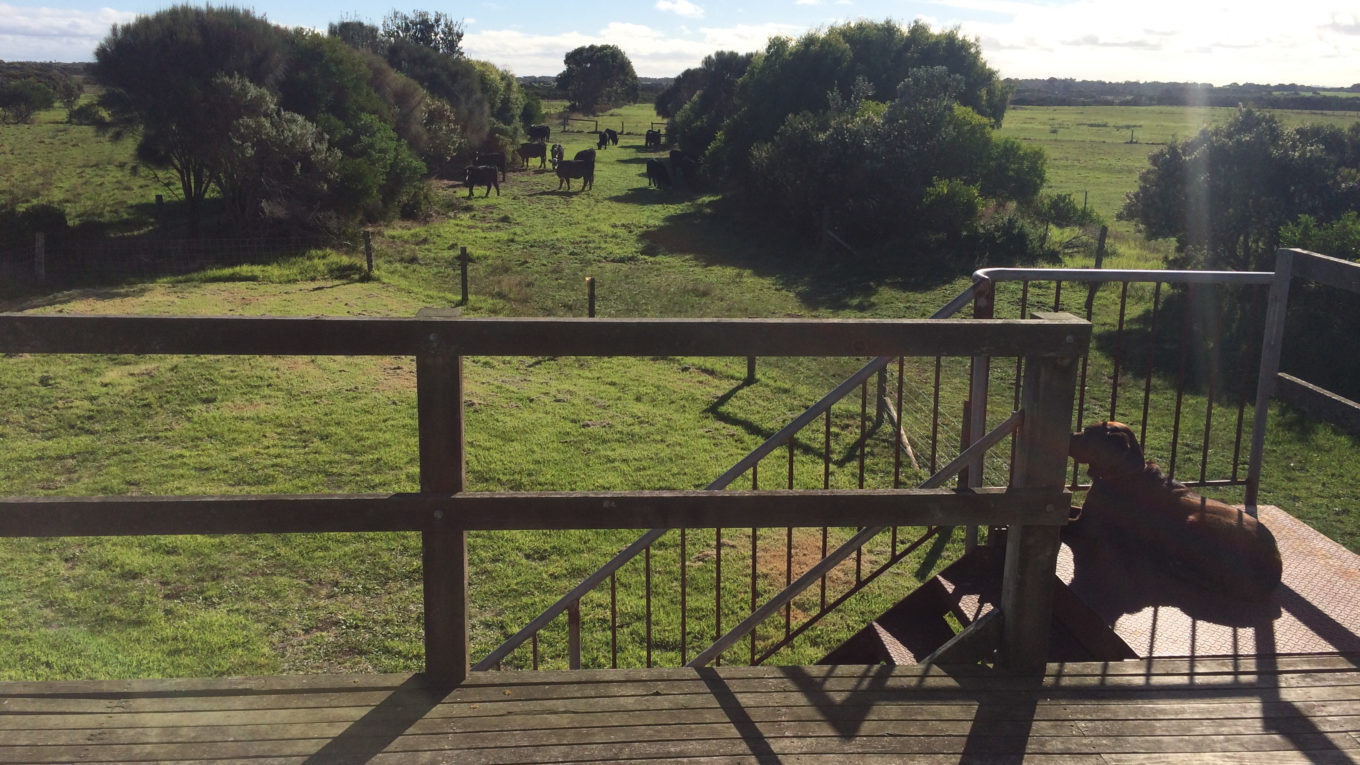 Sitting atop the steel stairs leading to the second storey of the Wreck Beach weekender, Nahla’s brown fur is bathed in the soft light of late autumn. She surveys her domain, eyes alert for signs of movement.

It’s a stunning evening. The sky has cleared save for a bank of soft white cloud low on the western horizon. There is a warmth to the late afternoon sun uncommon for this time of year. There is only the slightest hint of a breeze, which causes the leaves of the trees – Swamp Sheoak, Coastal Wattle and Gums – to sway ever so slightly. Light from the lowering sun glints off spider webs and the wings of hundreds of tiny insects that dance in the mid-air.

The air reverberates with the calls of a dozen different birds and the dull roar of a distant ocean. These sounds of nature are interrupted occasionally by the buzz of the electric pump connected to the water tank. Three horses gaze nonchalantly in the paddock to our right while a pair of bunnies hop through thigh high grass and tussocks of the left-hand side paddock.

The power lines cut through that paddock to the horizon, eventually making their way to Wonthaggi. Those lines provide a convenient perch for dozens of blackbirds who pause for a rest between foraging through the grasses below in flocks. The cloud bank on the horizon looms closer and the sun dips behind, prompting a flurry of activity and sound from the birds on all sides.

The horizon is back-lit with a beautiful orange hue. A v-shaped band of light stretches to the heavens. Nahla’s attention is caught by the movement below and she sits bolt upright and alert, with keen eyes she tracks the slow movements of a black crow picking its way through the paddock.

The chill in the air settles on the ground. It’s nearly time to go inside. It will be dark soon. A long moonless night lies ahead.

This project was developed on the unceded lands of the Bunurong / Boonwurrung language group of the eastern Kulin nations, where I was born and currently live.

I respectfully acknowledge indigenous Ancestors and Elders, past and present.